Fear of Success, fear of Failure 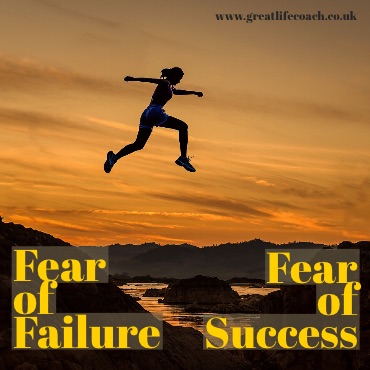 What is your relationship to Success and Failure?

The forces of success and failure often affect our ways in the world. I offer success coaching to individuals as well as providing motivational talks to groups/audiences.

Some ponderances for you... So is success what happens when you do not fail? What if you could not fail, would you be successful? What if we defined success in terms of not failing? To do that lets explore the concept of failing.

Failure is a label that is often identified during life coaching relationships often in the form of...

I am successful, but I am frightened of failing.

I cannot do that, what if I fail?

The power this word has over many people's sense of happiness is extraordinary. When our coaching work reveals a strong identification with the word, together we will quickly develop a new concept of failure that removes its stultifying power. To redefine your relationship to the word failure, it is important to understand what success means -- uniquely to you. Because once you stop relating negatively to failure and you have a clear idea of your own definition of success, you can get on with your life. You'll kick yourself for not getting started sooner.

Since childhood you have been bombarded with powerful popular culture messages that define failure as being poor, anonymous, powerless, unpopular, or physically unattractive; indeed your parents may have propagated this spell, ingraining negative attitudes about how you relate to the world. Failures are teased, bullied, and rejected – both by other people and themselves! This media definition of failure has resulted in many of us being enslaved to a culture of fear and avoidance of failure. Failure is one of the "dirtiest" words in our society and most people believe that "success is equal to right and therefore equal to good, while failure is equal to wrong and, as such, is bad." Did your life get stuck on the starting line through fear of failure? Did you fail because you bought into popular culture's definition of success, for example, being overly concerned with popularity or appearance? What an unnecessary burden to carry.

I like to explore this territory using two F words. Big Failure and little failure. To me Big Failure is what we do when we Fail ourselves, while its lame little cousin, failure, is what we do when we fail to meet the externally mandated, internally adopted expectations of our culture. In life coaching we will learn about both. We look at failure in terms of how to "fail well" using The Law of Feedback which states: there is no failure; there is only feedback. Successful people look at mistakes as outcomes or results to learn by, not as failure. Unsuccessful people look at mistakes as permanent and personal. And going deeper, we will also build an understanding that the most painful place to "Fail" is not living in accordance with your core values. Effectively failing yourSelf, by not being true to yourSelf. Do you know what your values are? When we set the foundation for our coaching work we always undertake an in depth revelation of your values using clever techniques that derives a full-proof list. This list helps us evolve your unique sense of what it means to succeed. ... You can find peace in that knowingness.

It is the fear of failure, not failure that cripples people. So which flavour of failure have you decided to hang your bag of excuses on? Fear of failure? Failure? Fear of success? Or all of them? Understanding how failure sabotages your perception of what is possible for you in life requires effort; effort that can be rewarded by getting you unstuck and making a difference to your lot, and crucially your relationship to your lot.

Success (ie. not failure!) isn't some unattainable, elusive thing. It's there for the taking. All you have to do define success in your own terms and then take the necessary, appropriate steps. Successful people overcome their fear of failure while fear incapacitates unsuccessful people. Most people self-limit themselves. Most people do not achieve a fraction of what they are capable of achieving because they are afraid to try — because they are afraid they will fail.

When people make fear-based decisions they are more likely to believe they are not the authority of their own life. You are more likely to believe that somebody else is the authority in your life. You're more likely to believe that authority. If fear is pushed on you, you are going to assume that you can't make a decision for yourself. Which then implies that some part of yourself is not good enough. Effectively fear underpins the feeling of not being good enough; causing you to look for self validation from any source you can get it. I'd like to work with you to make more love based decisions in your life. This is the only way to move towards self-love, the inner knowing that you are good enough and reconnection with life. Don't be fearful of any part of yourself. Be your full self, your full love, your full humanity. No more fear-based decisions no more believing that you are not the authority of your own life. It's okay to be appreciative of every part of yourself.

When we live from fear, we limit ourselves in our lives and what is possible, not only do we become afraid of all the negative things in our lives but also the positive. The opposite side of fear is excitement where we live in a place of positivity and positive expectations of what will happen.

Get in touch with your values. Define Success in your own terms… Understand this… very subtly you are succeeding when you are living life in a way that honors your values and is true to yourSelf. However if you are still caught up in your adopted concept of failure try the following…

If you feel like you are failing (as defined by the popular culture that you subscribe to)… Tell someone all about it and then together use your imagination. In order to reduce stress and make you feel better, it is vital to reduce the fear of the problem by bringing everything out in the open, gaining perspective — and not only the facts of the problem, but also your feelings about it.

Imagine overcoming the problem and falling short of the goal (failing); then figure what the worst consequences would be and what could be done about them. Thus, if the worst does happen, you're at least prepared and if it doesn't, then you're relieved and probably pleasantly surprised…. Go celebrate!

We all have the power to turn 'failure' situations around just in the way we view them.

Perhaps most powerful of all - take the chance and face it. There is nothing better to reduce the fear of failure than having it happen and knowing what it can and can't do. We must face it, live through it and prove to ourselves we can survive it and recover. Many positive things can only be learned by making mistakes and failing. Failing things can be seen as good in two ways: it teaches us valuable lessons (how to change things so we don't repeat the same mistakes), and it also makes us grow stronger by adding to our repertoire of experiences and resources of strength. Act, learn, refine, act, learn, refine … That's called living.

Have you ever noticed a child with 'fear of failure'? And those adults who seem to be free of any fear of failure - what are they like?

Overcoming your fear of failure will help you be more forgiving towards yourself, help you develop a boundless curiosity and enjoyment of new challenges, and help you change the way you approach success to make it more fun and much less daunting. To overcome your relationship to the F word it is important to learn the right skills and have adequate motivation to use those skills in your life situation. My success coaching generally has the following approach...

Get in touch if you are interested in learning more about creating a life coaching relationship, perhaps with a focus on creating a no-failure lifestyle. Another day in the Rat Race