The American dream is giving way to the Great Global Awakening 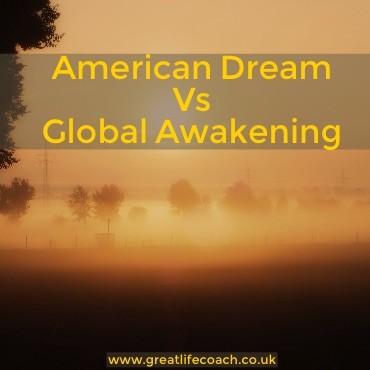 I have always been impressed by the teachings of Arjuna @ The Translucent view.

The following article speaks very loudly about the kinds of things I see my clients grappling with every day.

We were reflecting on how much the "group think" has changed in the last years. From blog posts, to movies, to things that sell well, to courses, we are collectively waking up from the idea that the point of life is to make as much money as possible and accumulate the best toys. The American dream is giving way to the Great Global Awakening.

Think of all the people you know. Think of the people who are most truly happy, in a multidimensional sort of way. People who are content with their lives, inspired, empowered, energized. What do they have in common?

Some people might say that it's all about meditation, spiritual awakening, feeling oneness with God. But honestly, I know a lot of people who have really made that the central point of their lives, and they're still looking for meaning.

Others might say that it's all about love. Find the right partner, settle down together, have children, create a family, and that's what makes it all sing. But, once again, that may do the trick for some people, but not for everybody.

I think it really comes down to what Danielle Laporte said: the people we know who are really, unconditionally happy, who have a resilience that tides them through both triumph and defeat, are the people who have discovered the gift that they really want to give to the world, and how to give it in a powerful way. As long as the answer to that question is authentic, and as long as you've found a way to express it to others, it does the trick every time.

For some people, this might be big and majestic: like inventing a new kind of computer, or ending world hunger, or writing a book which sells millions of copies. But other people have a gift that's just as important, if not quite as visible: like raising beautiful children, or tending to a garden, or just loving one person so completely and totally, that nothing is being held back.

​So what is it that really gives life meaning, and purpose, and energy?

Get in touch perhaps we can help you find out.

Tweet
How do you feel about this post?
Happy (0)
Love (0)
Surprised (0)
Sad (0)
Angry (0)
Tags:
happiness purpose
Things seem to be changing
Divorce, Uncoupling and Separation

Being of Greatest Service

No Direction, Stuck, Lost or in a Fog